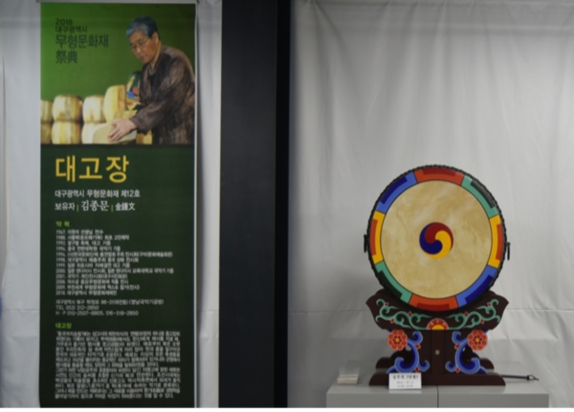 The daego is a big drum. In the ‘Dongguk Yeoji Seungram’, the record that the jonggojaphi had been done as one of the performance processes of the harvest ceremony in the ancient times is seen. And, in Buyeo, too, the event that had been enjoyed as the songs and the dances when holding a memorial service to the gods of heaven had been called “yeonggo”. From the old times, by having been settled down in the lives of our ethnic group in a natural way for a long time, the drum is considered as a representative percussion instrument of Korea that had cultivated the wonder and the excitement.
By becoming a pupil of the teacher Lee, Won-seok in the year 1941, which was the year he became 17 years old, the master chief Kim, Jong-moon had learned about the drum production functions. And, after his honorable discharge from the military and until the present, as a master craftsman who has been having the production of the drums as the family business, he has been designated as the Intangible Cultural Asset No.12 of the Daegu City.